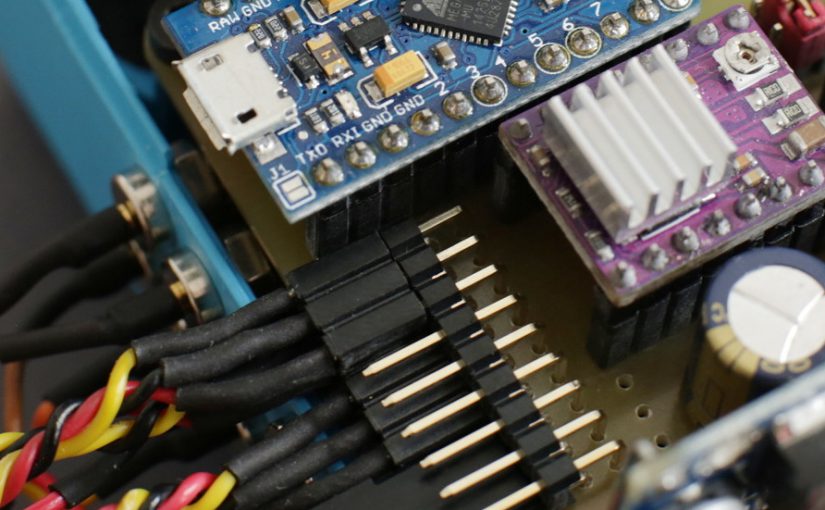 If you have built the Monkeyprint DLP printer control board you might now ask yourself how to hook it up. Follow this guide and in no time you’ll have your board up and running….

We’ll dive right into it, so get your soldering iron ready and prepare your tools.

We will go through the following steps:

Caution: take care not to electrocute yourself while fiddling with the mains voltage! Properly insulate all high voltage lines!

You can supply the board with a voltage of up to 36 V. The higher the better your steppers will run.

The following pictures show how to connect the power supply. To be able to unplug it I use 2 mm gold plated banana plugs. Pay attention to the polarity, there is a “+” and a “-” sign at the bottom side of the board.

Now before you switch on the power supply for the first time, remove the Arduino and the stepper drivers from your Monkeyprint DLP printer control board! We need to set the step down module to 5 V first. The next two pictures explain how it’s done.

With this step your power supply is set up. Let’s continue with the stepper motors.

There are four power lines for each stepper motor, two for each winding. The cables can be soldered directly to the board. I use some 2 mm female banana connectors in combination with my 3D printed electronics box so I can easily unplug the motors.

The order of lines on the board is A1 A2 B1 B2 where A and B are the windings and 1 and 2 are the two lines of the same winding.

If you want to use a Raspberry Pi to run print jobs from, simply connect the relevant pins on the Monkeyprint board to the 40-pin GPIO header of your Raspberry. They have the same pin-out and exactly align with the GPIO pins, so just solder some wires to the Monkeyprint board, attach a female header and plug it onto the Pi.

The end switches are connected by 3 lines: ground, 5 V and the signal line.

I use Everlight ITR8102 photo interrupters as end switches. Whichever your use, check your data sheet to identify the anode and cathode of the IR diode as well as the emitter and collector of the photo transistor.

On the other end, connect all three lines to a female header so that the ground line is in the center. The whole thing should look like this:

You can now plug your end switches to the header on the Monkeyprint board according to the following image.

The next picture shows which end switch goes where.

There is now support for a shutter servo. Before you plug it onto the header on the Monkeyprint board, make sure the pins in the servo’s connector are in the right order. In the board version 0.91 ground has to be in the center which might require you to reorder your servo connector’s pins. In board version 0.92 the 5 V line is in the center, which is far more common for servo connectors.

If your pin order is correct, simply plug your servo to the header like this:

You can plug two LEDs onto the board using the connector next to the Arduino. These will light up on stepper motion and signal the direction in which the stepper goes. Use a 3 pin female header for that.

Simply connect the cathodes of two LEDs of different colors with the ground pin and the two anodes with the other two pins. I use some LED mounting rings to fix the LEDs to my electronics box.

The reset button can be used to reset the Arduino. This is needed to flash the firmware or in case something hangs and you want to stop the motors and restart. Simply connect a button to two wires and plug them onto the board using a female header.

You should really use a cooling fan to protect your stepper drivers (and your Raspberry Pi if you use one) from over-heating.

I use a 5 V 200 mA fan made by Sunon. It is a 60 mm fan which fits my electronics box quite nicely. I cut the cord to about 3 cm and removed the rpm signal line. As the fan sits directly next to the board the short cable will be of advantage.

It is now time to plug in the stepper drivers and the Arduino!

First, the stepper drivers. Plug them in just like in the picture below.

Next, plug in the Arduino with the USB connector pointing outwards.

To blow some life into the Monkeyprint DLP printer control board you need to flash the firmware into its memory.

To do this, connect the Arduino to your PC using a micro USB cable. Start Monkeyprint and select “Flash firmware” from the “Settings” menu. Then, press the reset button twice within 750 milliseconds. After that, the Arduino starts its bootloader and will accept the firmware update. Simply hit “Flash firmware” and wait until you see the output in the text view below (it should say something with the word “success” in it, otherwise it went wrong).

With this last step you have an operational Monkeyprint DLP printer control board, congrats 🙂

One thought on “Monkeyprint DLP printer control board wiring tutorial”