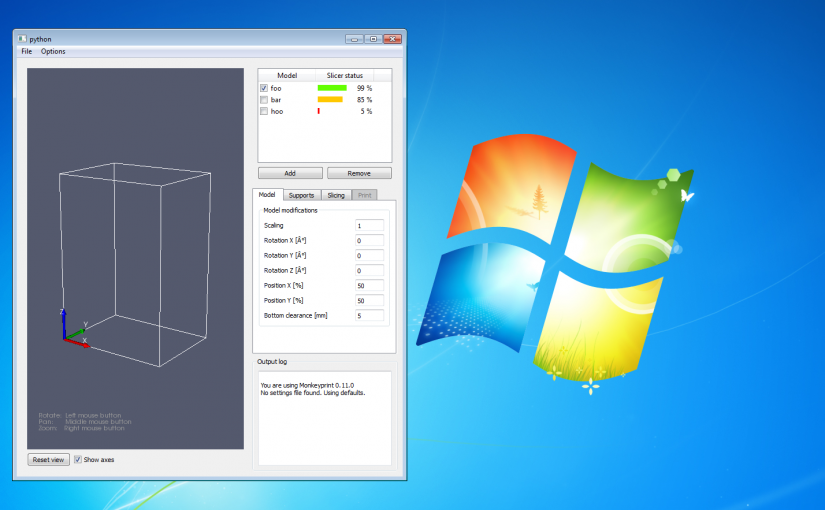 Another modification of my Monkeyprint 3d DLP printer software towards getting more users is under way! Many people have been asking for a Windows version and my blog’s visitor statistics also show that an astonishing 59% of visitors are running Windows. Fine. Challenge accepted!

Surprisingly (at least for me), many 3d DLP printer users or makers run Windows. Well, while I don’t like very much, that’s still fine with me. I’ve taken some time examining what I need to do to port my Monkeyprint DLP printer software to Windows.

Turns out one of the fundamental decisions when starting Monkeyprint was made poorly. When I had to decide on which framework to use for the graphical user interface there was a 50/50 choice between GTK and Qt. Well, as my physics teacher in school always used to say, 90% of the 50/50 questions are answered wrong. Of course, I chose GTK as it was closely related to the Gnome desktop environment that many Linux distributions use. It promised to work on different platforms as well. However, as I recently found out, the integration of the 3d view that I use to display the models in the build volume did not work with the rest of the interface on Windows. The small piece of code that connects it to the GUI had been abandoned by the developers in 2007 and was not available in a working version.

Simply put, this means I will have to convert the whole GUI to Qt. First tests on Windows show that the interface works and the 3d view is already up and running (see the picture above). And while I had some kind of gratuitous aversion against Qt at first, I now found out that it actually is very similar to GTK in its structure and at some points even easier to handle.

Until the new Qt version works, the GTK version is of course still available under the release branch of my Github. I’ve updated the instructions page to reflect the change in branch naming.

Well, there’s still a lot to be done to get Monkeyprint DLP to rise and shine again, so stay tuned for new updates…