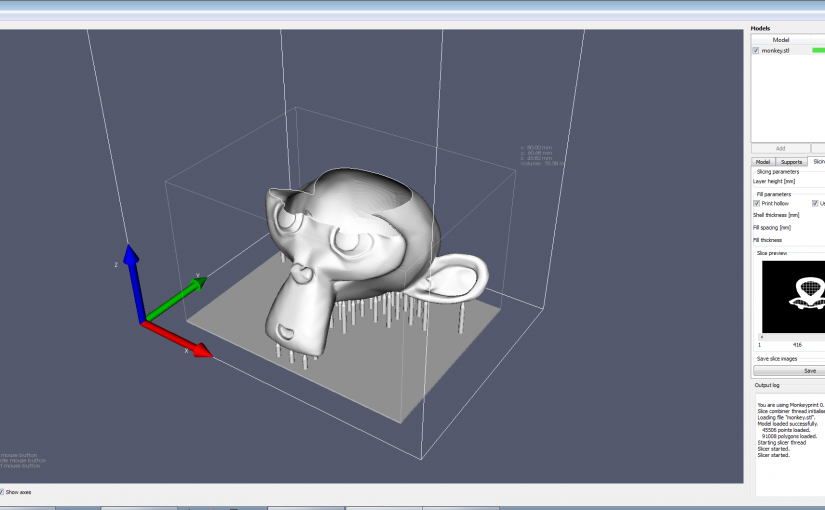 Hoooorrrayyy! After diving back into Monkeyprint DLP development for a couple of weeks I can finally announce that my 3D DLP printer software now runs on Windows!

Neglecting Windows users was the biggest point of critique concerning my DLP printer software Monkeyprint. This was mainly due to the fact that I decided for GTK as a graphical user interface toolkit — which was missing an essential bit to display the 3d view on Windows. To make this work I had to rebuild the whole GUI using the Qt framework which took me quite a while. Hopefully, the effort pays of and Monkeyprint DLP will gain some users as the Windows version seemed to be a feature much asked for!

To make things even better, Windows users can now download a pre-packaged exe  file that contains all the necessary libraries. Download and run, that’s it 🙂

The readme file on my github provides some updated installation and usage instructions as well.

I took the opportunity to think about which features Monkeyprint DLP should provide. In consequence, I’ve stripped much of the fancy stuff that has not been working 100% reliably anyways — like the Raspberry Pi server — and focused on the parts that are absolutely necessary for Monkeyprint DLP to be useful. These are:

I’ve removed the design files for my printer board and also the custom control commands that were used by my firmware. This stuff only made things more complicated. In my opinion, the easiest way for anyone building a DLP printer is to use one of the readily available G-Code boards out there.

Making Monkeyprint available for Windows was a fair amount of work. To make it work in the future, I’ll be needing some help from you guys. Download it, test it, report bugs on github and tell me how it behaves with your printer!