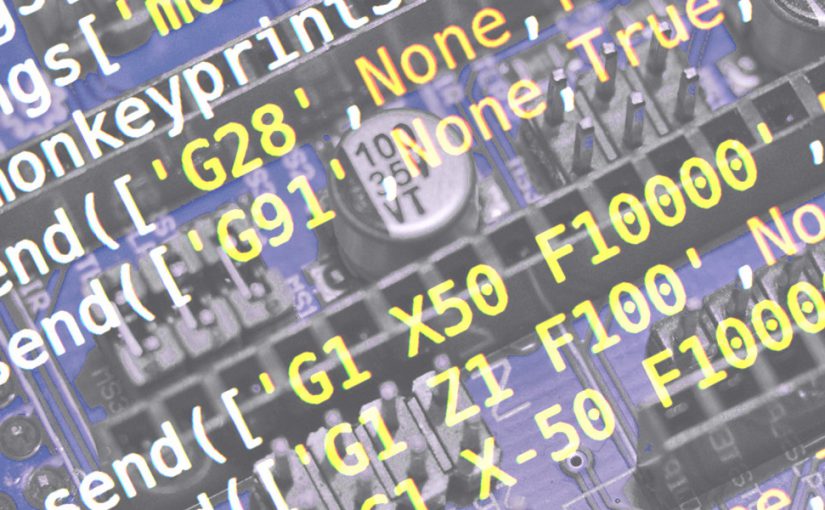 Yes, this means that you are able to use almost any G-code-based driver board you like!
And what’s more: I have redone the whole print process engine. The print process is now totally configurable (including custom G-code commands), giving you an unprecedented degree of control over almost everything.
Want an extra tilt, a pause after exposure or a wiper for a top down printer? Just alter the pre-configured print process to your needs. This also means that you can use servos for tilting (a feature that has been requested) or even make your board beep a tune (if supported).

What do you need?

To get your printer running on G-Code you need the following items:

Set up the hardware

First, you’ll need to set up your hardware. I assume that most people will have that already so I’ll make this very short using the RAMPS 1.4 board as an example. You can get more info in the Reprap Wiki. If you already have a working setup you can skip this section.

Configure and compile the firmware

Before doing this, you need to calculate the steps/mm, i.e. the number of steps that is needed to move an axis (for example your build platform) by one mm. If for example your build platform has a lead screw with 5 mm lead and your stepper has 1.8° step angle, the distance per step would be (360°/1.8°) / 5 mm = 40 steps/mm. For a layer height of 0.1 mm this would make 4 steps.

Configure Monkeyprint to use G-code

In the Print Process tab you’ll find two things: a drop down menu of pre-configured G-code command modules as well as a list view of your print process.
Simply choose the modules you need from the drop down menu and add them to the print process. They’ll appear just below the currently selected item. Use the ↑ and ↓ buttons to move a module up or down.

The Edit button allows for renaming and changing the module’s G-Code.

There are some special command modules:

With these new features I hope to bring Monkeyprint DLP to a wider user base.
Obviously, the next steps have to be providing a proper documentation and making Monkeyprint DLP more stable.
I’m also working on my own board and still have the Raspberry Pi integration in the pipeline (it’s working but still unstable), but these will have to wait until Monkeyprint DLP itself is matured and until I find the time to build my own printer…

Do you use a different board? Test it with Monkeyprint DLP and tell me about your experience!
If want to contribute, share your firmware and I’ll be happy to pack it into Monkeyprint DLP.
Post your ideas, feature requests and bugs by opening issues on my Github.
There’s a new project overview as well, so post your thoughts there as well!