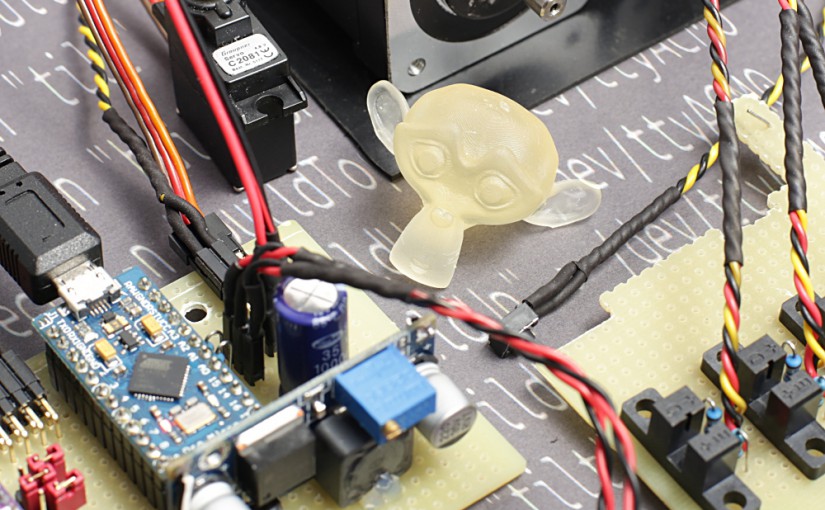 Monkeyprint is a pre-processing and print control software for 3d DLP printers published under GPL license. It aims to be an easy to use and complete solution for your own DIY 3d DLP printer build.

It provides features such as:

In addition Monkeyprint comes with schematics for the hardware side of your printer. The hardware consists of inexpensive and widely available components. And the best thing: Monkeyprint already includes the firmware needed to breathe some life into your hardware and make it communicate with your PC.

The following article will provide information on how to download, install and use Monkeyprint.

The following installation procedure has been tested on a fresh install of Ubuntu 12.04 and 16.04. If you encounter any incompatibilities with the linux distribution of your choice, don’t hesitate to comment.

Monkeyprint depends on the following libraries:

If you are running Ubuntu or a similar Debian-based distro you can install these dependencies by executing the following command in your terminal.

After the installation of dependencies has finished it is time to download Monkeyprint itself. Navigate to the directory you want Monkeyprint to be installed in and simply run this in your terminal to download from Github:

To start the program, navigate to your Monkeyprint directory:

Set up your hardware

Before you can use Monkeyprint, you need to set up your hardware.  You will need the following components:

Once you have downloaded Monkeyprint from Github, you can find the schematics drawn in Eagle 6 in the hardware folder.

Please refer to this blog post and also to this one for more details on the circuitry. There will also be a PCB layout soon.

THE FOLLOWING INFO IS OUTDATED.