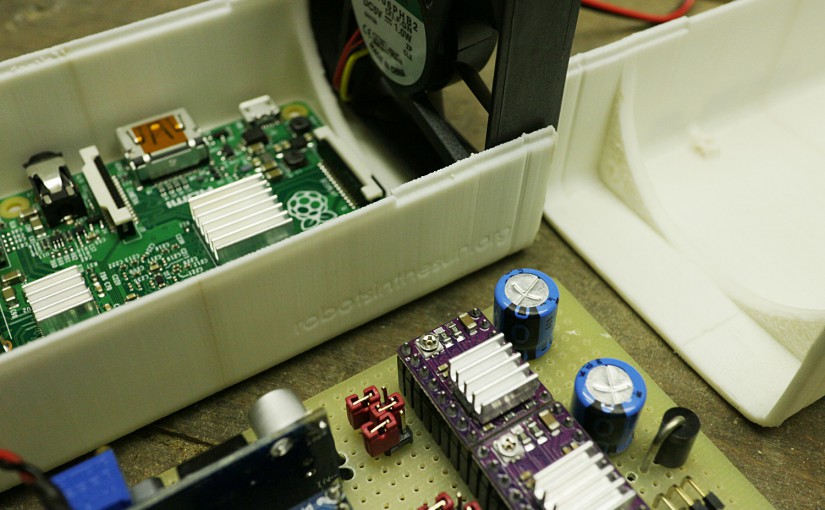 Great electronics need great casings, so I set out to make a first electronics box prototype for my 3d resin printer. Not only is it 3d printed, but in addition to the Monkeyprint electronics board it contains a Raspberry Pi 2. You see where this is going, don’t you…

But back to the electronics box. Initially I planned a metal box made from aluminium sheets. You can get laser cut, ready-to-fold sheets for achievable prices nowadays. But the devil is in the detail: lots of fixations for all the parts would have to be made. So I decided otherwise. We have an old Ultimaker FDM printer at work. It has some glitches and the precision is not that impressive, but at the end of the day you have an electronics box with all the necessary connections to the boards, the fan and everything else. After that there was some post processing, cutting out the holes for the connectors, fitting the parts together and mounting the board. Check it out in the video below:

The resin printer electronics box measures 65 x 65 x 125 mm and has a wall thickness of 2.4 mm. It is made of to halves that interlock on the long sides and are kept together by the fan on one side and by an aluminium sheet on the other.

So what’s the Raspberry Pi 2 for?

I plan on using Monkeyprint in two different ways: with the printer as a USB device and as a standalone machine with the Raspberry Pi as a print server.

In both ways you will be able to use Monkeyprint to pre-process your models, including support generation and slicing. The difference is that one way you’ll have to have your PC attached and running during the print while with using the Raspberry Pi you can simply send the print job and leave / shut-down your PC. The connection will be over LAN I guess. Plugging in a USB stick with the file to be printed might also be an option.

But these are dreams of the future. First, I will complete the Monkeyprint rebuild with Gtk and start the printer design process. There has been lots of work going into this already and I will have some presentable results with cool new features (multiple object printing, to name one) in the near future!